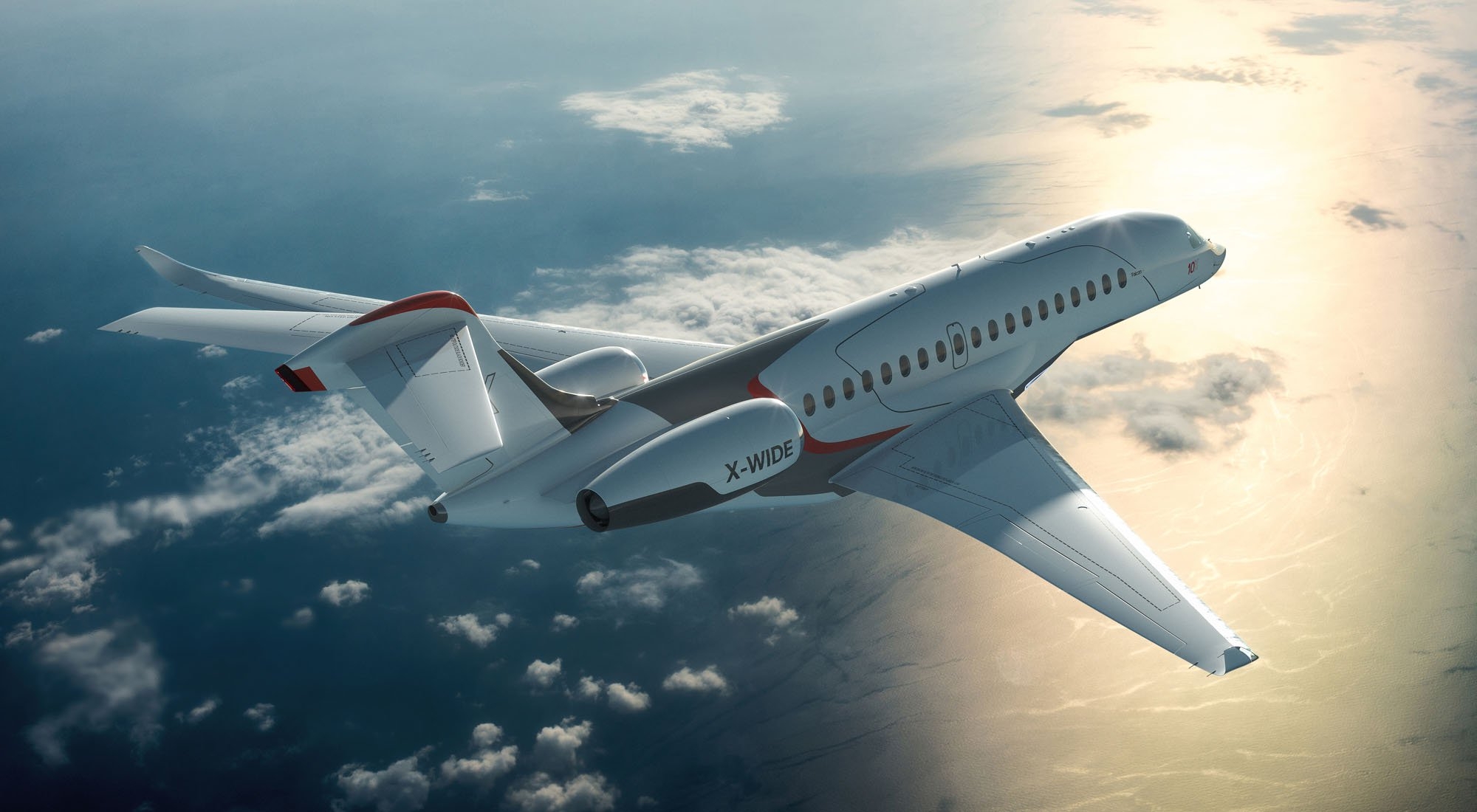 French private jet manufacturer Dassault has unveiled its new ultra long range private jet, the Falcon 10X. The planned flight range is 13,400 kilometers, which will allow to compete with the Bombardier Global 7500 and Gulfstream G700. The Falcon 10X will make it possible to perform such flights without fuel stop as New York - Shanghai, Los Angeles - Sydney, Hong Kong - New York, Paris - Santiago. Falcon 10X certification and commissioning is scheduled for 2025.

“Today we are introducing a new benchmark in business aviation,” said Dassault Chairman and CEO Eric Trappier. “10X will offer passengers an unrivaled flight experience, along with advanced safety features based on front-line fighter technology. We've optimized every aspect of the aircraft for the passenger's needs and set a new level of capability for ultra-long range aircraft. ” 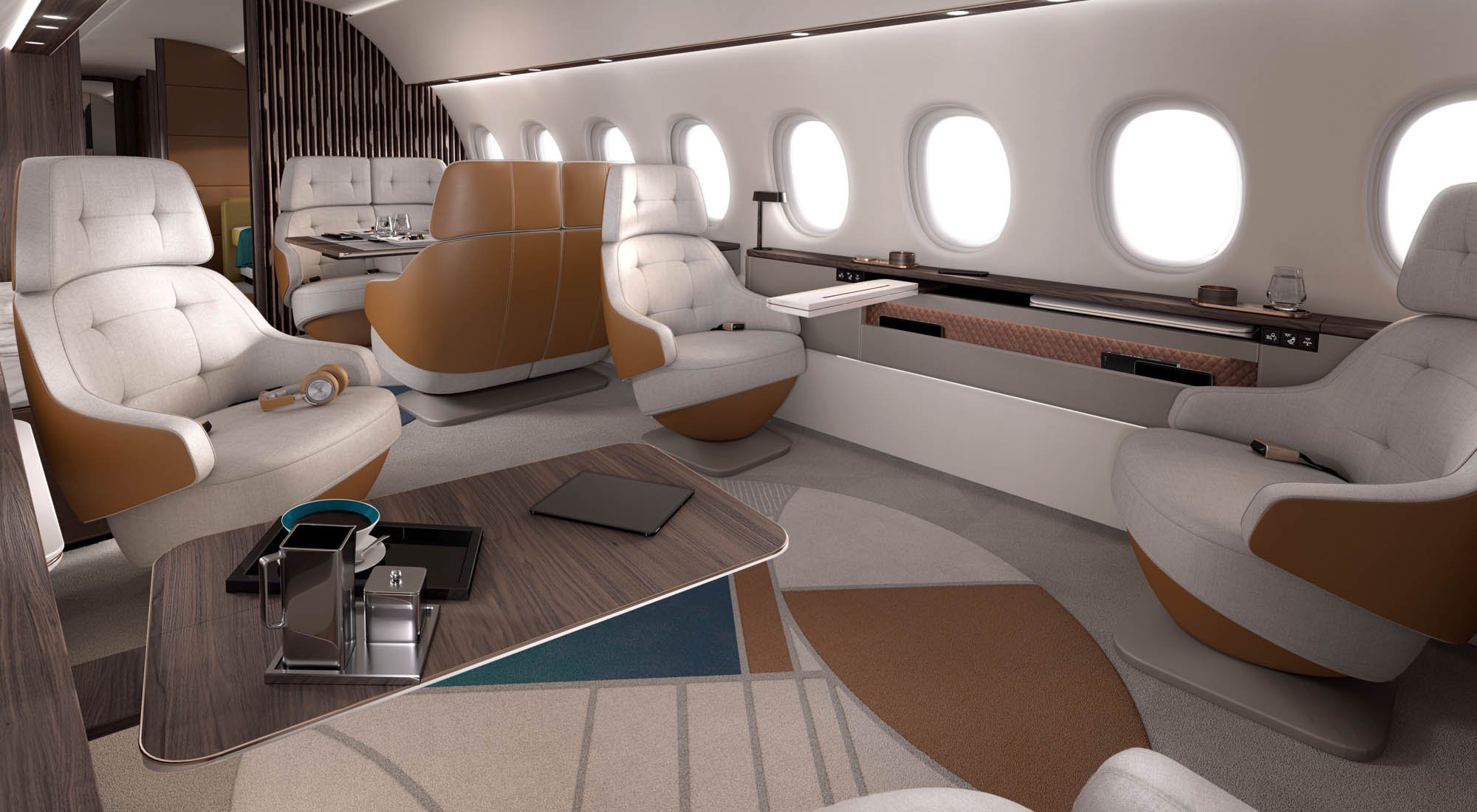 Powered by two Rolls-Royce Pearl 10X engines, the new business jet has a 76.5 cubic meter cabin, which sets it apart from the competition as it boasts the largest cross-section of its classmates. The aircraft has a cabin height of 2.03 meters and a width of 2.77 meters.

Dassault draws on its expertise in composite wings for the Rafale fighter, so the 10X wing is made of composite carbon fiber for maximum strength, reduced weight and minimum drag. The company made big changes to the T-shaped 10X, ditching the characteristic cruciform and downward tilting horizontal stabilizers on earlier Falcon models. The 10X T-tail is a new design element for Falcon business jets.

Falcon 10X cockpit will set a new standard for intuitive design with touch screens throughout the cockpit. Built directly from Dassault's latest military technology, the next generation digital flight control system will provide unprecedented levels of precision and flight safety, including a revolutionary new one-button recovery mode. One smart throttle will serve as the main power regulator, connecting both engines to a digital flight control system that will automatically control the power of each engine. 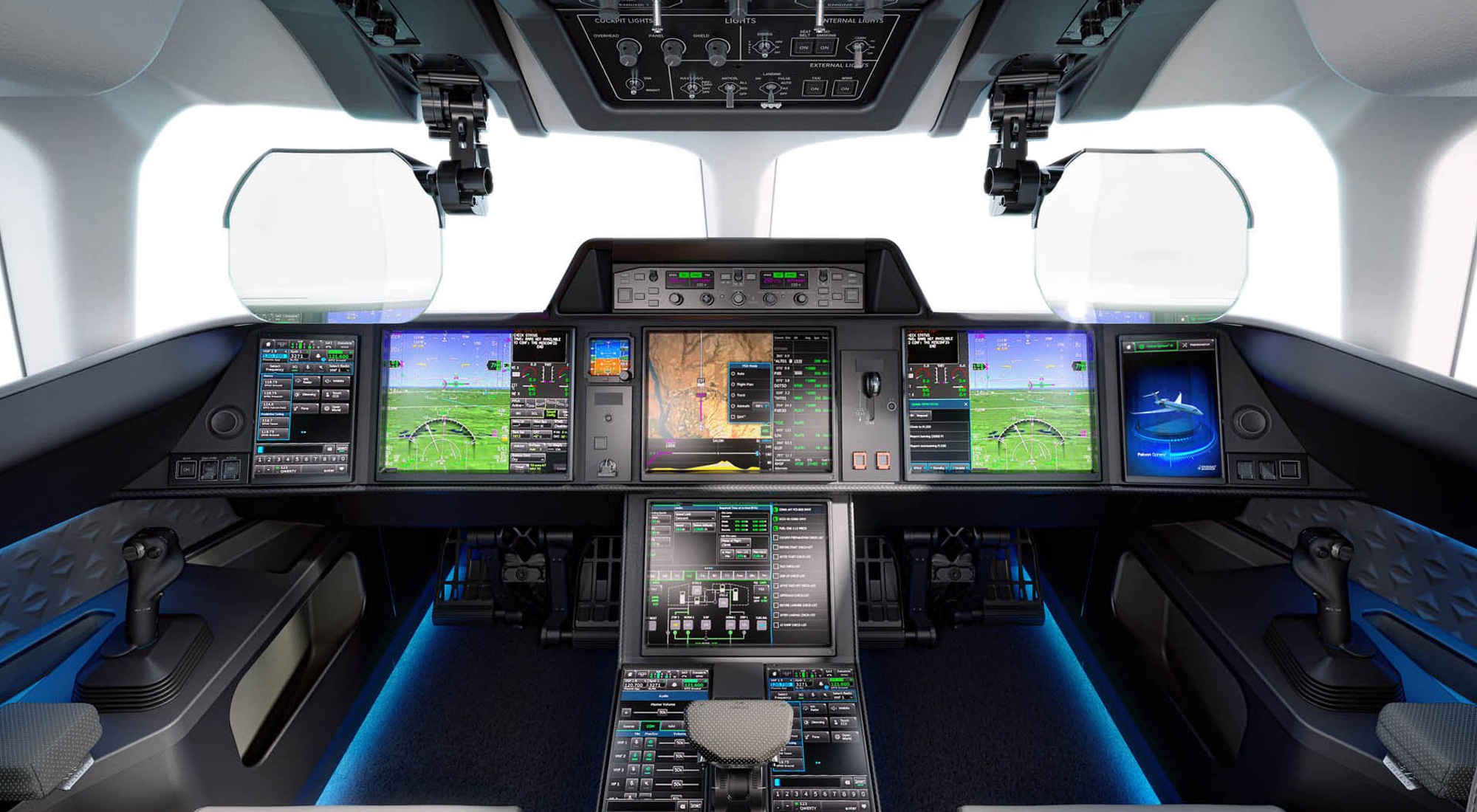 The new business jet will receive an updated version of avionics based on the Honeywell Primus Epic, which has long been the main product of Falcon. In addition to the four 14-inch touchscreen displays, the cockpit will also have four additional nine-inch touchscreens for features such as FalconSphere. The top bezel will be much smaller, with many switches and controls moving to touchscreen displays. The cursor controls remain in place, providing an alternative control mechanism, either for pilots who prefer this method of inputting information, or in the event of turbulence.

The twin-engine aircraft will be powered by the most advanced and efficient business aviation engine in development, the Rolls Royce Pearl 10X. The 10X is the latest, largest and most powerful version of the Pearl series, delivering over 18,000 pounds of thrust. 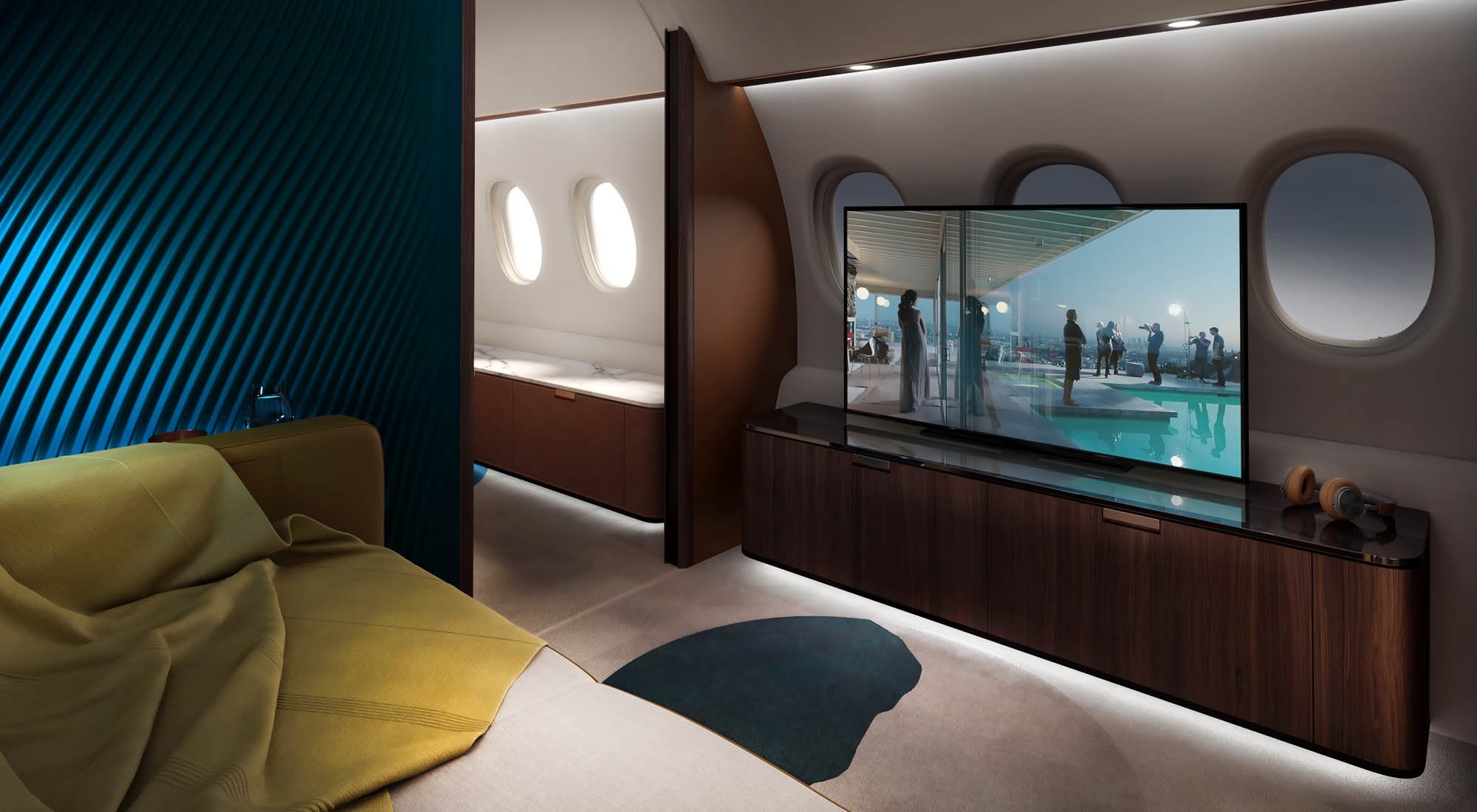 The Falcon 10X will have the largest and most comfortable cabin on the market and offer more modularity than any other aircraft in its class, with a choice of multiple interior configurations. 10X is large enough to accommodate four areas of equal length, but owners can customize their cockpit to create a truly personalized interior, including, for example, an expanded dining/conference area, a dedicated entertainment area with a large screen, and a private queen stateroom or a large master stateroom with separate shower. The 10X will have a completely new fuselage with 38 portholes that are almost 50% larger than the Falcon 8X.

“10X will be more than just another big step forward in business aviation. It will be the absolute best business jet in the ultra-long-haul category and will remain so for a long time to come,” sums up Trappier. 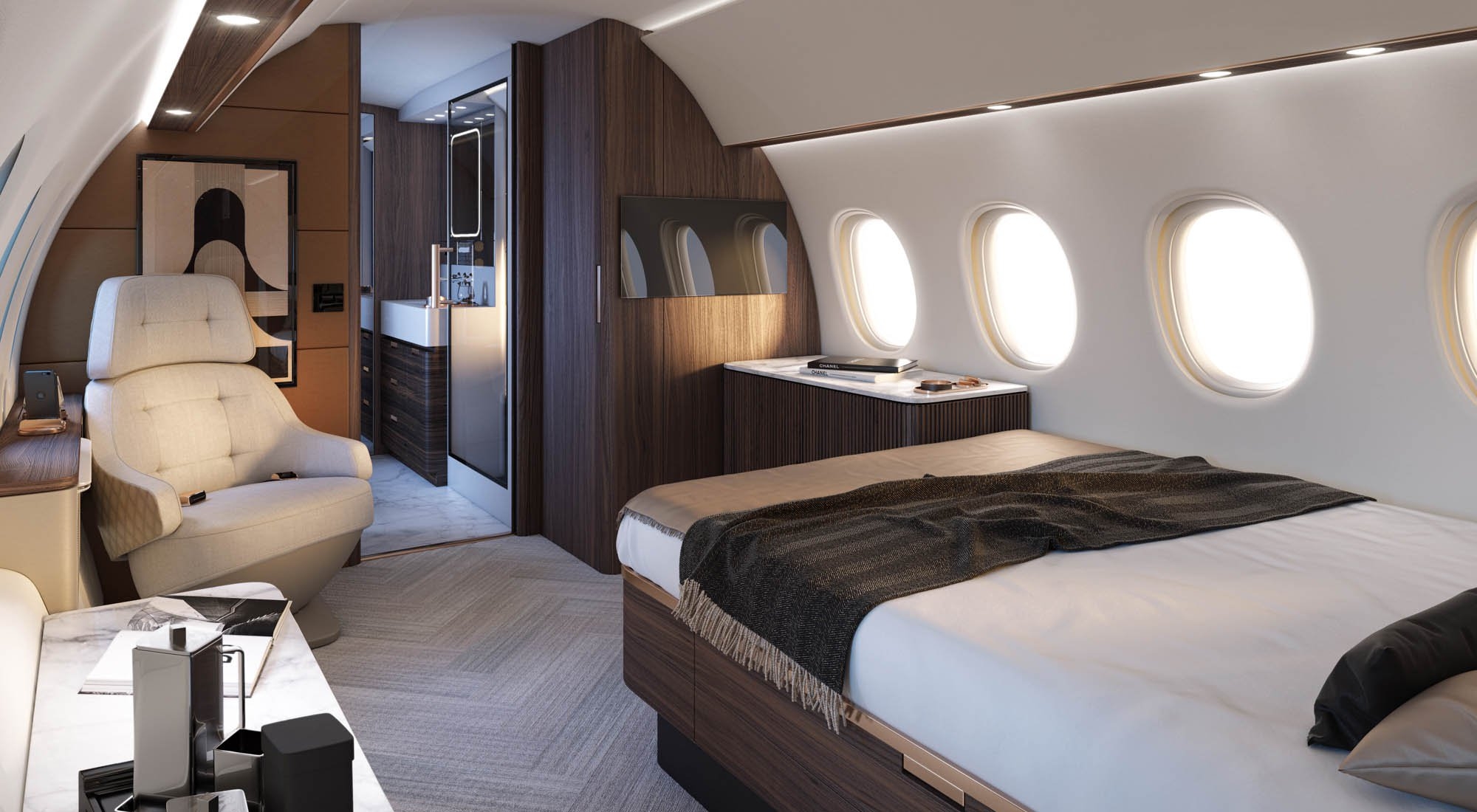